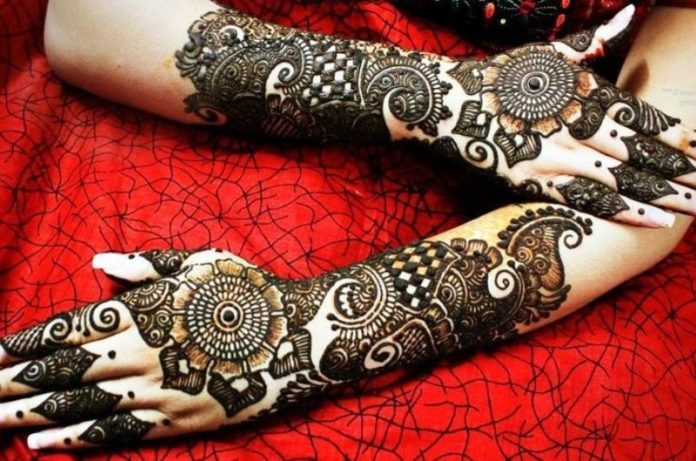 Whoever from whichever country, everyone knows about mehndi. Mehndi or henna, the name might differ according to cultures but the auspiciousness and heartiness of it are always the same.

Every single time you google mehndi for your next big event, what pins come 1st on your Pinterest? Mehndi designs of Bombay obviously! Since the time it started, it has evolved into many new variations; further in this article- Bombay mehndi designs: 7 eye-catching styles to choose from, let us look at some exotic designs.

Mehndi is a type of temporary body art that originated in ancient India. Mehndi is a decorative design especially drawn on palms or feet, created from powdered der leaves of the henna plant according to google- Dating back to ancient India, mehndi is still a popular form of body art among the women of Bangladesh, Pakistan, Nepal, the Maldives, Africa, and the Middle East. In the late 1990s, mehndi decorations became fashionable in the West, popularized by the Indian cinema and entertainment industry, where they are called henna tattoos.

Mehndi is derived from the Sanskrit word mendhikā. The use of mehndi and turmeric is described in the earliest Hindu Vedic ritual books. It was originally used for only women’s palms and sometimes for men, but as time progressed, it was more common for men to wear it. Staining oneself with turmeric paste, as well as mehndi, are Vedic customs, intended to be a symbolic representation of the outer and the inner sun.

Vedic customs are centered on the idea of “awakening the inner light”. Traditional Indian designs are representations of the sun on the palm, which, in this context, is intended to represent the hands and feet. Mehndi has a great significance in performing classical dance like Bharatnatyam.

Henna/mehndi is usually applied using a cone filled with henna paste or a stick. The henna liquid is used in form of a thick liquid which will dry after 15-20 minutes of application. As soon as it starts drying it starts having cracks (you can take that as a sign of removing it ) once the liquid has dried up you can apply lemon drops on it and keep it for a few minutes before removing. Adding a few drops of lemon expedites the oxidation and add a darker color to your mehndi.

Names of Top 7 Bombay mehndi designs to choose from

1. Floral Design: This mehndi involves floral patterns and extends to elbows, perfect to go with ethnics.

2. A Blend of Paisleys and Flowery Patterns: A duo pattern to go perfectly with ethics.

3. Peacock: A perfect design for engagement or marriage or any other auspicious occasion as peacock resembles love and togetherness.

4. The Zardosi Pattern of Jaali Work: This pattern is basically made for brides. It gives you an ornate look, adding charm to the splendor of the newlywed. This design needs a lot of patience and practice to be recreated.

5. Arabic Mehndi Design: These designs include the jali work and are perfect for occasions like Teej or karwachauth or even eid. The maximum portion of the design stands out as the element of attraction.

6. Simple Finger: These are stylish modern-day designs that have henna applied n the palm and finer in a sleek and artistic way.

7. Black Mehndi: These types of designs are even easy for beginners. It does not involve any heavy designs or patterns and can be carried out elegantly.

For any of your auspicious days, from your next best to your coming best, these were some of the references for you to choose from. I hope you like our article ‘Bombay mehndi designs: 7 eye-catching styles to choose from. Write us down in the comments below if you picked any of these for your special day.

Top 6 Covergirl Mascaras Which Everyone Should Know About

6+ Matte Lipstick Shades Every Girl Should Have

Top 5 Toners For Oily Skin, You Must Try

Top 5 Best Facewash for Oily Skin, You Must Try

Most Popular Sunglasses on Amazon

Should you add collagen protein powder to your beauty routine?

How To Get Rid of Whiteheads On The Face

ABOUT US
Beauty Tips Network is an online community of Beauty, Fashion, and Wellness. We are here to contribute the latest updates to the readers on beauty, fashion, and wellness.
Contact us: beautytipsnetworkofficial@gmail.com
FOLLOW US
© Copyright 2021 - Beautytipsnetwork